Some cats look like teddy bears and then some dogs look like teddy bears. If this is the type of pet you looking for, you’re in for a treat with this canine. The American Akita breed is one of those that resemble a bear and has been the favorite of many pet owners due to its watchdog demeanor and willful personality. Interested in teddy-bear looking pets, click here.

They make excellent watchdogs and guard dogs for you and your family and have been doing so since the 1600s when kept s pets in homes. It is a very brave dog and was originally referred to as a “snow country dog” before it became a world-known breed.  If you looking for not only a loyal dog but also a best friend, keep reading to find out more about this guy, because not only is the dog of an admirable personality but the owner needs to be one as well.

What Makes an Akita Such A Good Pet?

Due to its heavy bones, stern look, and massive sturdy build, they have a solid muscular body covered with a double coat with dense hair throughout the body except for behind the neck where it is slightly longer. In Japan, this dog first emerged as a fighting animal https://en.wikipedia.org/wiki/Akita_(dog)

They have a strong jawline and a tapered muzzle like a black nose. Their ears usually stand erect and triangular and their neck is relatively smaller than most canines. Their small, almond-shaped eyes give them a unique look. With firm legs, they can stand firm and run for long distances. When standing upright they have been registered as one of the biggest breeds around, weighting somewhere between 80 and 100 pounds and standing at an average of 26 to 28 inches. 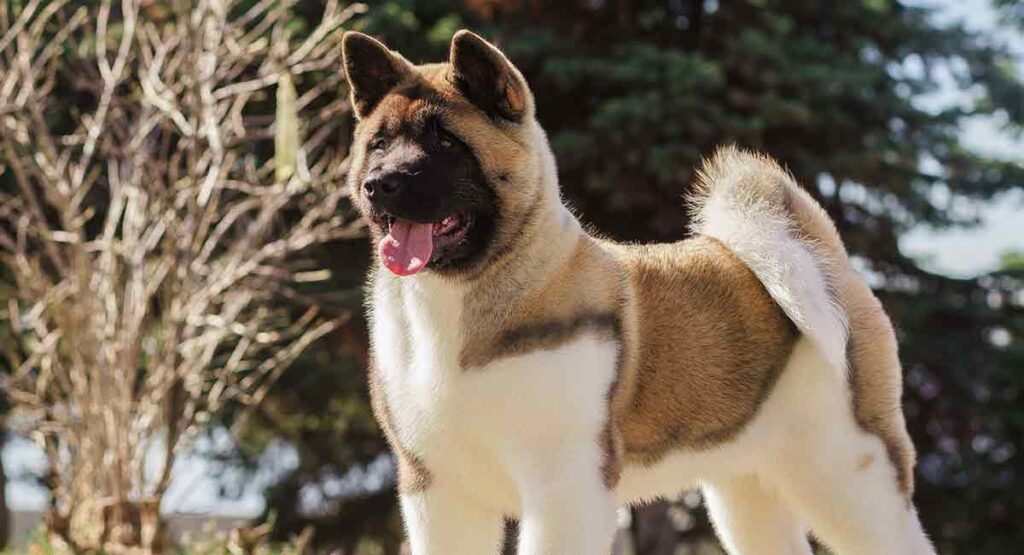 Their Owner and Their Home

From the information provided above regarding their size, one needs a big enough house with a large garden for them to move around. if you are wondering whether they prefer the outdoors to the indoors, surprisingly enough they are quite comfortable being inside the house, and as a result, they are very loyal and devoted to their owners.

Their personality is naturally quite territorial and protective and is often wary of strangers. This makes for good “yappy” dogs, which is to say that they do not normally bark or yap at anything unless it seems suspicious. So, when this does happen, as a pet owner it is worth checking it out.

Before deciding on getting one, you must also evaluate yourself because owners of these canines are often patient and strong or bold as they are and have an overall understanding of their traits. Also, it is important to note that if they do find something suspicious, they are ready to pounce on it or bite it, so having it around children may not be a good idea unless they have gotten to know them.

In this case, when having guests over in your home, you should post up a proper warning sign or call to others about the dog, or lock him in the back yard for the time being. They do have an excess amount of energy which means you can get a bit of a jumpy dog that needs activity on most of the days, so if your one for walks, jogs, playing with the pup, he will keep you fit and active.

Having said that, their temperament and personality changes when around their own family the relish in calm moments and activities too. However, having him around other pets may sometimes cause some troubles because they are so possessive of their belongings, they do not often share their toys, and even owners, with other pets.

When taking them on vacation, they will thrive in snowy lands as they are naturally adapted to cold environments. They love ice and snow and would cherish every moment of playing in it. They can sometimes get bored and lose their sense of adventure so keeping them active should be considered. They are a working dog so primarily do both the watching and the guarding for you.

As an independent breed, they may be hard to train, however, it is not impossible. It requires a strict, disciplined owner due to its intelligence and stubbornness. If you start training them at an early stage while they are still a puppy, you and he can both benefit from a good life.